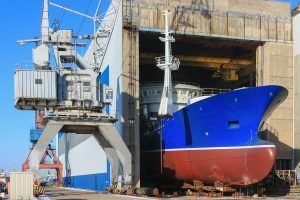 Though numerous materials are required in shipbuilding, steel is by far the most common. Carbon and mild steel grades are used throughout the structure of a ship, forming its hull, decking, and nearly everything in between. These metals are ideal for marine engineering thanks to their high yield and tensile strengths, superior resistance to fatigue, and low costs. But steel hasn’t always been the primary structural material used in shipbuilding.

Shipbuilding in the 19th Century

In the 1800s, the most common technique of shipbuilding was composite ship construction. Composite ships were built with a wrought iron frame and wood planking. The popularity of this design was partly due to the wrought iron frame, the strength of which allowed more interior space than wooden ships and made the ship virtually invulnerable to hogging and sagging (deformities in the beams caused by loaded cargo).

Shipbuilding in the 20th Century

The use of steel in shipbuilding gradually grew through the turn of the century, but it wasn’t until World War II, when the need for durable, lighter, and faster watercraft for wartime operations arose, that steel took over as the primary structural material of shipbuilding. Military ships and cargo freighters during this time were made almost exclusively out of steel to meet this demand.

With the end of the war came the end of the use of iron in shipbuilding and the birth of the block construction method of prefabricated steel beams and sections that is still used in shipbuilding today. Carbon and mild steels are a commodity for modern shipbuilding, and the demand is high for talented steel fabricators who apply their craft to building sea vessels that are used around the world.

Steel that is used in building ships must be precisely shaped to meet the parameters of the blueprints. Therefore, it is imperative that professional steel fabricators who serve the shipbuilding industry have the proper equipment to deliver perfection on every steel component they fabricate.

If you specialize in structural steel fabrication for shipbuilding, you want industry-leading plasma cutting technology like BeamCut on your side. BeamCut boasts state-of-the-art features that can help improve the quality of your work and speed up production. These features include:

The FANUC robotic arm has six axes for full 360-degree beveling and can cut any shape or profile used in shipbuilding. And it is three times stronger and lasts three times longer than the industry standard.

BeamCut is fueled by Hypertherm XPR300 plasma, one of the most powerful plasma sources for structural steel fabrication

BeamCut’s CNC software allows you to manually calibrate cutting tolerances, nest parts, and track robotic cutting paths to prevent mistakes and unnecessary waste. Import files from a fully developed shape library or draw your own, all on one easy-to-use interface.

Thanks to its all-in-one design, BeamCut replaces punches, drill lines, band saws, layout and marking stations, and coping and grinding stations. In fact, BeamCut can handle every step of the fabrication in one pass. And because it’s automated, it minimizes material handling and the risk of damage that comes with it and helps business owners maintain a lean workforce because BeamCut only requires one technician to operate. This remarkable structural steel fabrication technology can remedy pinch points in your production and improve turnaround times by as much as 80%. That’s an outstanding return on investment!

To learn more about BeamCut, the CNC plasma cutting system that can help perfect structural steel fabrication for the shipbuilding industry, contact us today.

As so many professional structural steel fabricators have learned over the years, automating the fabrication process can deliver numerous benefits. With the right CNC plasma cutting equipment installed in your shop, you can reap a significant return on investment by automating your production. Benefits of automated structural steel fabrication include: Better Precision of Fabricated Steel […]

Shipbuilding production requires large amounts of structural steel plates. It’s no surprise, then, that this industry can be a boon to professional structural steel fabricators. The types of steel plates used in shipbuilding vary depending on their applications, and because they come in numerous shapes and sizes, fabricators must be able to produce perfect plates […]

OPERATOR CONTROL SYSTEM
The Operator Control System is an industrial grade touch screen computer that is both powerful and easy to use. It features the most advanced windows based operating systems on the market.

HYPERTHERM PLASMA
Hypertherm’s versatile plasma systems have been designed and built for maximum efficiency and productivity for x-y cutting, chamfering and robotics operations. Combined with the Fanuc robot arm, it produces perfect bolt holes with no taper.

INFEED AND OUTFEED CONVEYORS
The Infeed and Outfeed Conveyors ensure precise and quick positioning of the material. They are manufactured of 4" heavy duty rollers mounted on pillow-blocks on solid heavy duty welded frame. A motor that is located in the central unit drives the conveyor rollers.

PHOTO-LASER MEASURING DEVICE
Our custom Photo-Laser Measuring Device is unique to the industry allowing automatic splitsecond profiling and positioning of your piece and guarantees the most precise cut possible.

MOBILE MEASURING UNIT
Our mobile measuring ensures continuous monitoring of the piece length by moving along the infeed conveyor following the piece. Its special design makes up to 2x more precise than other measuring devices.

SAFETY CABINET & SMOKE TRAP
The safety enclosure is state of the art. It serves to delimit the space reserved for robotic cutting and the circulation area around the system. Our safety latch work envelope door allows for easy access and will shut the machine down if opened during production. In addition, an air outlet with a market leading 4250 CFM blower makes it possible to extract the smoke (dust collector not included - optional) and prevents health risks associated with plasma smoke. The safety cabinet complies with OSHA and Canadian safety standards and may help lower insurance costs.